A New Dimension, A New Reality: a Quest for Success, By Adrienne Papp 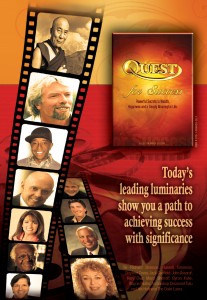 Premiering nationwide in June, 2010, The Quest series is a profoundly transformational must see. Producer and Director, Lili Fournier’s masterpiece liberates the viewer from the collective human condition of suffering by showing us a conclusive and comprehensive analysis, proven even in Quantum Physics, of how easily we misinterpret the mind through inherited conditioning. A new dimension of consciousness occurs by discovering a conscious presence, a deeper self behind the veil of thought forms, or commonly referred to as our Ego, and a natural state of self emerges, which is no longer obscured by the falsification created by our habitual mind.

While the megahit, The Secret, taught us one aspect of the creative process, The Quest series fills up the gaps. It answers all the questions through world renowned teachers like the Dalai Lama and business tycoons such as Sir Richard Branson walking us step by step through the true nature of man. We learn that we are encoded with the infinite intelligence of the universe and that everything we need is already here and within us.  Mankind is able to survive, which I believe is the task of the 21st century, just by understanding that the creative power is within and not without. It is not another technology that we need, but rather, a new and truthful way of thinking. For those who felt inspired by  a glimpse into the true nature of man shown in the Secret, and wish to go deeper can count on a complete transformation by the Quest series, which is really a well rounded  main course after the tasteful appetizer of the Secret. We dig deeper, understand more and see a less commercialized, but rather thorough insight into the evolutionary road open to man.

We learn that the real injustice is the imprisonment of the soul by the human ego, and that becoming of value to ourselves and society is what is ultimately called success.

The Quest shows us the beginning of the end of unconscious, involuntary and compulsive thinking, which is the core of all unhappiness in all areas. A full presence emerges experiencing a brand new joy taking us to a state of pure consciousness, a clarity of interconnectedness while raising the vibrational frequency of the physical body with such intensity that the outside world becomes relatively insignificant.  Even the most skeptical of minds become curious and hungry for more, sensing that a brand new power is just on the horizon. We call it Awakening, Enlightenment, God Consciousness, or as in Quantum Physics: the Presence of the Observer.

A single green is able to grow through cement.     The Pacific Northwest Salmon beats itself bloody on its quest to travel hundreds of miles upstream against the current with a single purpose of survival, but also Life.

Let us change the World, but not through thinking, rather, through our true selves.

The series is distributed worldwide  by Long Tale.