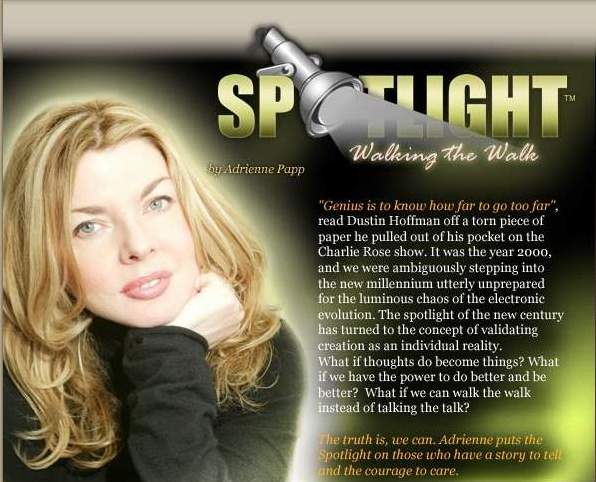 In addition to being the Owner, President and CEO of Atlantic United, Incorporated in New York City, with practices in Los Angeles, California and Aspen, Colorado with several divisions, such as Atlantic Publicity, Atlantic Publisher, Spotlight News Magazine and Atlantic United Films, Adrienne is also the former Profile Editor of Flying Adventures Magazine (flyingadventures.com); the Editor in Chief of Savoir Magazine (savoirmag.com); a host, and contributor of Chic Today, a fashion magazine (chictoday.com), La2Day (La2Day.com) and It Magazine (itmagzine.net), along with six local publications including Beverly Hills 90210, Brentwood News, Santa Monica Sun, Bel-Air View, Palisades 90272, and Malibu Beach (www.westsidetoday.com)

Adrienne is the Chairman of Public Relations of the William Fox Hungarian Film Club and Atlantic is the PR and Publicity Company of the Hungarian Film Festival in Los Angeles. Her contributions at (it) Magazinepromotes pro-social actions to inspire and fuel life altering and world changing events. Adrienne is also the former Profile Editor of Celeb Staff, an exclusive coffee table style magazine with readership of 200,000 of discerning consumers who enjoy the amenities of an affluent lifestyle. Until 2006 Adrienne was the Profile Editor of all six publications of the West Side Today Publishing House.

Adrienne has also been featured and published in numerous other publications, including Celebrity Society (www.celebritysociety.com) and The Beverly Hills Times Magazine (www.beverlyhillstimesmagazine.com) where she was Managing Editor as well. Adrienne wrote cover stories in the Brentwood News Group’s six regional magazines as well as for Celeb Staff Magazine. Some of Adrienne’s cover stories included profiles of Angelina Jolie, Robert Redford, Adrian Pasdar, Lea Thompson Kathy Ireland, Michael Jackson, Mick Jagger, Clint Eastwood, Gerard Butler, and the late Violet Parkhurst among many, many others.

Adrienne was also a Guest Professor of Marketing and Advertising at OxfordUniversity’s InternationalBusinessSchool. She has built and managed an International Consulting firm in New York City in the fields of health and beauty, high-technology industrial and consumer product marketing and distribution, telecommunication, finance, joint ventures, investment banking, strategic partnerships, and entertainment financial consulting. Investors of her company included The Invus Group, a half a billion-dollar private equity fund in New York City, owner of Weight Watchers, and an Irish holding company with large investments world-wide. She also worked in Denmark and Sweden as the Director of Business Development of Copenhagen based software manufacturer and led the company to its current market leader position within one year.

Adrienne earned her MBA/Economist, Master of Science degree in Europe from one of Europe’s top Universities, Corvinus University of Economics, and completed a post-graduate course at New York University (NYU) in 1994 in International Law, Finance and Taxation. She has also received credentials from UCLA, California in advertising, marketing and journalism. She graduated with all A’s and was offered a PhD for her diploma work that is filed at the Library of Corvinus University today(http://en.wikipedia.org/wiki/Corvinus_University), which is among the 50 best universities of Europe. Adrienne also invented a mathematical formula for computer programming that was taught at the University IT Technology department.

Adrienne is characterized as a highly energetic executive with years of professional success in publishing, feature editorial writing, event coverage, business development, movie production, distribution, foreign and domestic market penetration, partnership building and contract negotiations. She is known to be innovative and resourceful, persistent and persuasive. She identifies opportunities and consistently exceeds objectives. A recognized self-starter with strong planning and development skills, Adrienne offers a multifaceted perspective with excellent understanding of today’s programs and alliances to customize and implement leading-edge strategies and systems.

Adrienne Papp was Knighted into a Lady / Dame by the Duke of Belgium, His Grace, Michael Schmickrath, Grand Prior General of the Order of Constantine the Great and Saint Helen. She took an Oath during a formal Investiture Ceremony to stay a Lady in this Chivalric and Knightly Order for a lifetime, which took place in Los Angeles on October 23. There are 87 American noble members of the Order, she is one of them. Lady Adrienne has become the Public Affairs Officer for the Imperial Order of Constantine the Great and of Saint Helen in January of 2011.

Adrienne has become the Feature Editor for Bunker Hill Magazine and the publicist for Ground Floor Gallery for Downtown Los Angeles.

The Order of Saint Constantine – To Be A Knight

A Westside Story, Knighthood and Chivalry in the New Millennium