A lot has changed since Robert Redford decided back in ‘85 that independent films and young filmmakers should have a place to celebrate their work outside of Hollywood. So he created an out-of-the-way film festival through the Sundance Institute.

One of those changes has been that Hollywood now shows up in a big way at the  Festival every year, but luckily little else has affected the way Sundance celebrates. As a result of their holding on to their values and freedom of spirit, this annual event in snow-encrusted Park City, Utah has become huge, with some 50,000 attendees from around the world and a slate of nearly 200 films that would tax the most ardent film fan.  It has also honored an enviable list of successful films created outside the studio system, including Sex, Lies and Videotape, Precious, A Guide to Recognizing Your Saints, (500) Day of Summer and Winter’s Bone. At Sundance it’s always the unexpected that you hope for, something with daring and a fresh point of view. Uncompromised by the concessions to audience research and market share that so many commercial films live and die by, Sundance is a place where the independent vision can flourish. 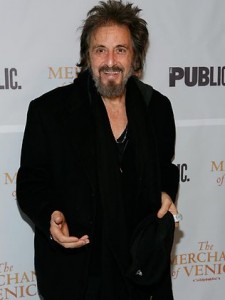 Among the most notable films for 2010, Like Crazy, a bi-continental love story, expressed the kind of quirkiness and charm that made (500) Days of Summer such an audience favorite. An off-center version of more traditional romantic-comedies, Like Crazy works on warmth and intelligence and its stars Anton Yelchin and Felicity Jones are an appealing duo as they sort through romantic and immigration issues.

Documentaries, always a strong Sundance contender, included an impressive lineup, with How to Die in Oregon and Cindy Meehl’s Buck big audience favorites in the category.  The former examines Oregon’s death-with-dignity law from a variety of perspectives; the other is an intimate portrait of a real-life cowboy and horse whisperer.  These films offer a very different feel in terms of tone but are similar in the way they deal with our basic humanity.  How to Die In Oregon was awarded the Grand Jury Prize with Buck a surprise winner for the Audience honor.  The World Cinema Jury Prize Dramatic Award went to Happy Happy, which is set in Norway and is possibly the most pleasant film about infidelity ever made, and the World Cinema Jury Prize Documentary Award went to critic’s favorite Hell and Back Again, a raw Afghan war documentary in the style of Restrepo. 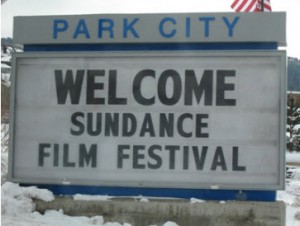 In less serious categories there was My Idiot Brother with Paul Rudd, and the satire of Salvation Boulevard, two of the more commercial movies shown at Sundance. Rudd plays a kinder, gentler hippie with plenty of unconditional love, and Salvation Boulevard skewers mega-churches as big-business, and features the teaming of veteran actors Pierce Brosnan and Greg Kinnear.

Sean Durkin was honored with the directing award for his somber-toned Martha Marcy Mae Marlene starring Elizabeth Olsen of the Olsen sisters, and a surprised Sam Levinson was awarded the Waldo Salt screenwriting award for Another Happy Day, one of the few prominent titles that wasn’t picked up by a studio for distribution by the end of the festival.

A real crowd-pleaser was the music documentary Troubadour, which captured the Los Angeles music scene in the mid-70s, and specifically the homespun music that came out of my old home, Laurel Canyon Blvd and was sometimes performed at the Troubadour in Los Angeles. Among the musicians who lived in the canyon during this Golden Era were Joni Mitchell, Jim Morrison, Bonnie Raitt, Frank Zappa, members of the Byrds, Crosby Stills and Nash and Love. 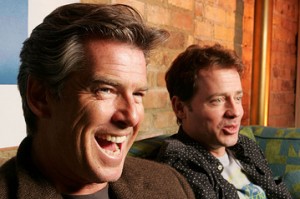 “That music was the soundtrack of our lives,” Carol King said during an interview at the festival, where she also performed with James Taylor. “I hear from people who are rhythm and blues aficionados, and it got to them. It got to a woman that I spoke to who lived in Cambodia. It got to the farthest corners of the world, so clearly it had importance for a lot of people. That’s why the period is romanticized, because what that music meant to people just became larger than life.”

Coast to Coast AM host, my very good friend, Rob Simone talked with Demi Moore and Kevin Spacey about their new  financial drama Margin Call, which was a big hit at Sundance and stars Paul Bettany, Demi Moore, Kevin Spacey,  my very favorite Jeremy Irons, Penn Badgley, Stanley Tucci, Simon Baxter and Zachary Quinto, who all showed up at the premier. 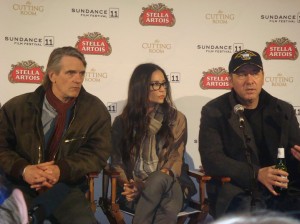 The press conference question and answer segment was run-of the mill until Rob Simone asked about the underlying message of the film, which sparked a remarkable exchange.

Simon Baxter commented  “what J.C. (writer J.C. Chandor) did on the page was to leave room for these characters to be human. Often a lot of scripts are ridiculously over-written , every thought or idea every emotional tick or beat is already on the page  and it’s kind of sad because there is nothing to find or discover or play with…”

Paul Bettany jumped in “We felt like a real company, …the speed of which was unreal. We became really quite close..” Kevin Spacey cut in  ” We were shooting at one Penn plaza, we were using the offices of whatever firm had been in that building, a hedge fund that had just gone under, it was really quite appropriate, we were using their offices as trailers, because even if you had trailers you had an 8 minute elevator ride to the lobby…so we were on set the entire time we were up there…”

“Almost like a dorm,” added Demi Moore. Paul Bettany made a funny comment:”That’s just weird, it wasn’t a dorm, nobody was sleeping with each other.” Kevin Spacey got the joke continouing   “I don’t know where you were…”

The room exploded in laughter.

Margin Call is a thriller that revolves around the key people at an investment bank over a 24-hour period during the early stages of the financial crisis. The tense subject is balanced with a serious drama of a company facing economic disaster.

Following in the tradition of Wall Street 2, Margin Call shines a light on the events leading up the layoffs in the investment banking industry in the month before the economic collapse in 2008. The writing is crisp and fast-paced with riveting performances from Spacey and Irons that have people already talking about possible Oscar consideration. 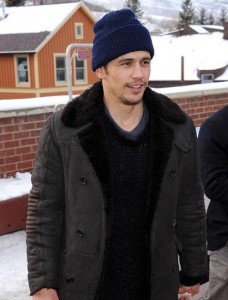 The Sundance jury awards, on the dramatic side, have sometimes been effective indicators of trending popularities for best picture nomination by the Academy.  Both previous Grand Jury Dramatic Jury winners Precious and Winter’s Bone received the Academy nominations. If the trend continues, Like Crazy may make it three years out of three when Oscar nominations are announced in 2012.

Special Jury Award for Originality:
Mike Cahill and Brit Marling for Another Earth

Special Jury Dramatic Prize for “creating a documentary for all ages”:
Being Elmo directed by Constance Marks 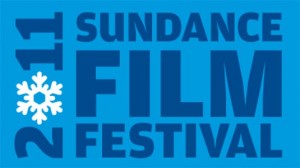